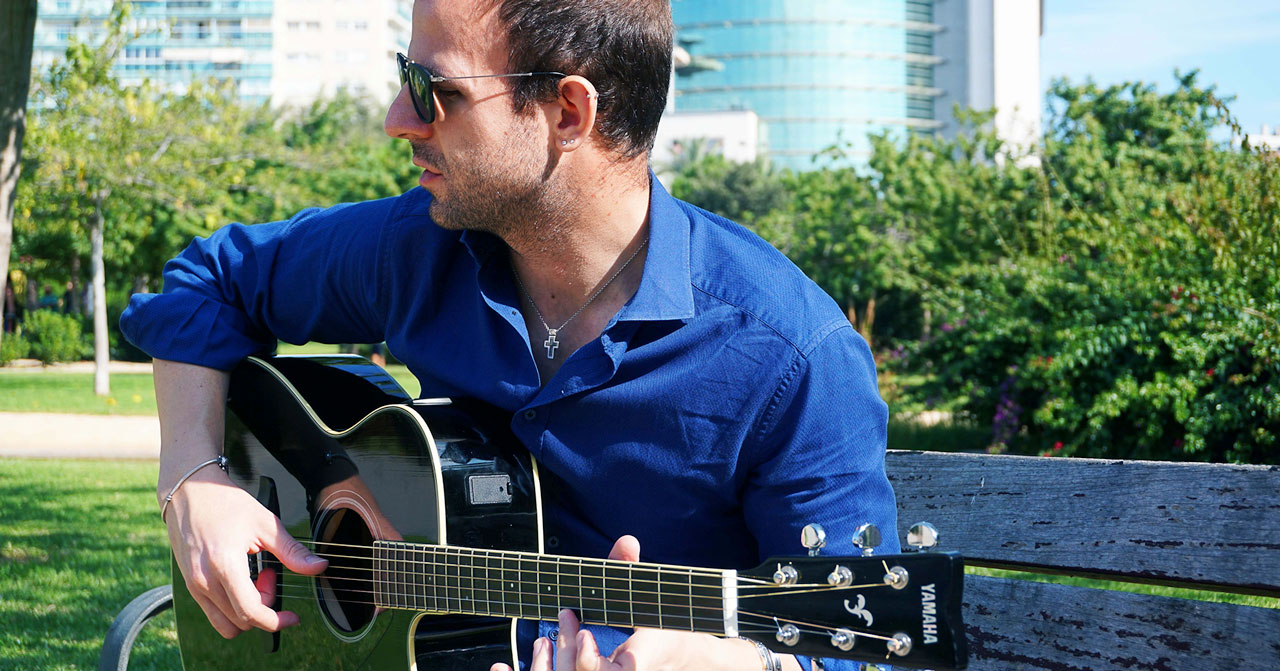 Michele Romeo is a guitarist, producer, and composer from Italy (Mazara del Vallo, November 6th 1992).
Fascinated by music since he was very young, his parents gave him his first guitar when he was 4.
He started formally studying guitar with a teacher in his hometown at the age of 10. After that, he studied music in Palermo at CFM.

When Michele was 13, his life started changing completely due to a very rare disease in his eyes. Initially, he became visually impaired but some years later, when he was 18, he lost his vision entirely.

Thanks to music, family, friends and faith he has been able to conquer many tough moments, developing a new life philosophy that goes beyond the things that we can just see with our eyes.

He wrote his first song when he was hospitalized in Rome in 2008, aptly calling it ‘Medical Center’. By 2012 he already had produced his first album titled “Leaves” which includes all the songs he composed during his teenage year. The album was recorded and mixed at CFM (Centro Formazione Musicale) in Palermo. It was presented At Garibaldi Theater in Mazara del vallo on January 2015 and at Feltrinelli in Palermo on May 2015.

In 2012 he decided to move to Milan to study at IULM University where he studied English and Spanish translation, graduating in 2015.
The life experience in Milan gave him the chance to mature considerably and it is reflected in his development as a musical artist.

On March 2015, he made his first TV appearance. He was a guest on the Italian TV Show ‘A sua immagine’ airing on Rai 1 and hosted by Lorena Bianchetti. He told his story and also discussed the correlation of music and spirituality.

After the experience in Milan, he decided to dedicate his life entirely to music. He began to focus on fulfilling one of his lifelong dreams, the idea to go to live in the USA. In 2016, auditioned for Berklee College Of Music in Boston, MA, where he got accepted and won a scholarship after participating in Berklee's Umbria Jazz Clinics. Before moving to the US, he spent a year in Sicily where he started composing and recording songs for his second album. There, he also had the chance to study with other great guitar instructors like Michele Pantaleo, Francesco Buzzurro and Osvaldo Lo Iacono.

In 2017, Michele moved to Boston and began attending Berklee College Of Music. The Boston experience has completely changed his life and due to his eye condition he considers Boston the most accessible place he has ever lived. Berklee gave him the chance to explore music and the guitar world in different shapes and it gave him also the tools to access the music production world allowing himself to become also a mixing engineer.